ASHLEY BEEDLE • Black Science Orchestra • Ballistic Brothers • North Street Crew
Referenced in Daft Punk’s song as one of the ‘Teachers’, Ashley Beedle first began DJing during the 1980s and made a name for himself during the heyday of Acid House. In the early 1990s, he teamed up with Rob Mello and John Howard to form the first incarnation of the Black Science Orchestra, signed to the legendary dance label, Junior Boys Own. After releasing the seminal club classic ‘Where Were You?’, BSO’s production unit morphed and evolved with Uschi Classen and Marc Woodford and tracks like ‘Strong’ and ‘Philadelphia’ were released as well as the 1994 debut album ‘Walter’s Room’ and dee 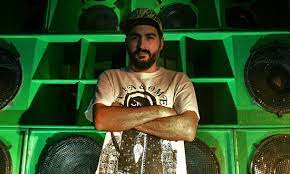 Running parallel with the Ballistic Brothers, Ashley was a founding member of the group X-Press 2, with fellow DJs Rocky and Diesel performing on 6 decks and 3 CDJ players. They scored global dance chart action through the 90’s and 00’s with tracks such as ‘Muzik Xpress’, ‘Say What’ and ‘London Xpress’ and charted at #2 in the UK Top 40 with their global hit ‘Lazy’, their collaboration with Talking Heads’ David Byrne which earnt Ashley an Ivor Novello award.

From the late 90’s onwards, Ashley continued to remix and produce, releasing the milestone ‘Grass Roots’compilation in 1999 and between 2001 – 2003, Bent’s ‘Always’ + ‘Magic Love’and The Streets ‘Weak Become Heroes’all received the Beedle remix treatment. Ashley’s remix of Elton John’s ‘Are You Ready For Love’ catapulted the song to No.1 in the UK Singles Chart. In 2005, Beedle remixed Bob Marley’s “Get Up, Stand Up”with Damian “Junior Gong” Marley’s “Welcome to Jamrock” to create the mash-up ‘Stand Up Jamrock (Ashley Beedle Remix)’ which the Marley family loved so much they ended up including it on the Bob Marley compilation album ‘Africa Unite: The Singles Collection’. The track went on to chart at #1 on the Jamaican National Charts.

Since 2015, Ashley has been working as part of the ‘North Street’remix collective with North Street Studio One owner and musical genius, Darren Morris andRamrock Records/F*CLR boss, Jo Wallace as well as solo remixes. 2019 already has a plethora of projects underway including Waterson’s debut album, an Afrikanz on Marz concept album, a radio show on www.totallywiredradio.comand unlimited remixes.