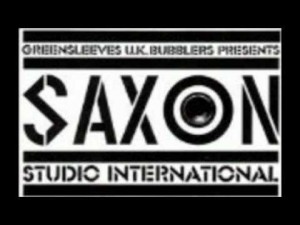 Having started out as a party set back in 1976, Saxon then progressed to supplying sound systems at local venues, functions and weddings in the South East London community of Lewisham. 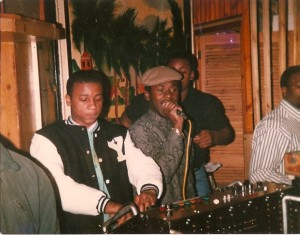 For the rest of the seventies, Saxon went about building their reputation as the Number One Sound System in the UK. With their MC’s, Dub plates and DJ’s; Saxon established their brand as a cut above the competition.
The Saxon sound came to prominence in the early eighties, largely due to the style pioneered by DJ Peter King. This was cemented by the now seminal “DJ Jamboree” dance in Lewisham. With people from all over the world flocking to hear their sound, this event signalled the beginning of Saxon’s popularity outside the UK.As the masses came to listen to Saxon Sound, so the performers queued up for a chance to be heard by such a vast audience.

The first artist to emerge on Saxon was Papa Levi, swiftly followed by Maxi Priest before the late, great Smiley Culture broke out on the Saxon Sound; all of whom were signed to major record labels and went on to enjoy Number One records.At the same time, DJ Papa Levi was riding high in the English and Jamaican Reggae charts, with his “Mi God Mi King” record topping both. To this day, Papa Levi remains the only UK artist to have scaled such heights in Jamaica.
Saxon stepped up the pace in 1985, becoming the first sound from the UK to tour America. Even though this caused a lot of anger and resentment from their UK competitors, the tour garnered worldwide recognition for Saxon; leading to even more international assignments in Jamaica, Bermuda, France, Germany, Sweden, Holland, Israel and Zimbabwe.That same year saw Maxi Priest record his 1st LP “You’re Safe”, which lead to Maxi connected with Sly & Robbie on his self titled “Maxi Priest” album in 1987. This record contained a cover of Cat Stevens’ “Wild World”, earning extensive airplay world-wide. 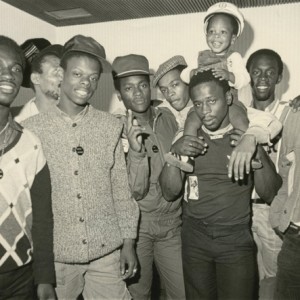 Before Maxi Priest became an internationally renowned reggae star, Tippa Irie’s “Hello Darling” forced its way into the Top Ten of the UK’s Pop Charts in 1986.This mainstream success lead to Tippa becoming Europe’s first popular reggae act, exposing Saxon to a global audience and leading to even more European dates and media coverage in the process.
Whilst Saxon were pushing their sound overseas, Smiley Culture was pushing his back home. Breakthrough tracks “Police Officer” and “Cockney Translation” both stormed the UK pop charts, with the latter going straight in at Number One. This success opened many doors for Smiley, earning him a television contract to present “Club Mix” on Channel 4.
As modern technology evolved, the introduction of pirate and community radio stations replete with star DJ’s threatened the long term future of sound systems. Many of Saxon’s peers dropped out of the game entirely, opening a window of opportunity for “Juggling”; where five radio presenters played their records in clubs without need of a sound system.
This evolution signalled the downfall of live entertainment in the dancehalls, and forced sound systems to change in order to keep pace with this new trend. Saxon stayed in the game, only without the DJ’s and fan bases their music and personality’s brought with them. 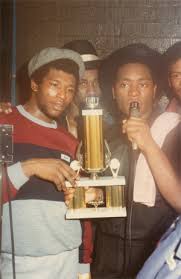 Of course, Saxon had their die-hard devotee’s too who stayed loyal to them as this new format took time to adapt to.
As the dance hall scene died out for sound systems, sound clashes emerged to take its place, where crew members from opposing reggae sound systems would pit their skills against each other in aural battle; resulting in the inaugural UK SOUND CUP CLASH of 1992.
Held in Birmingham, this clash included Luv Injection, V-Rocket and Stereo Phonic; yet Saxon came through this clash victoriously, to establish their claim to be the best sound system in the UK. The following year marked the first World Sound Cup Clash held at Edmonton’s Roller Express, which ended in controversy when Saxon lost to Body Guard from Jamaica. 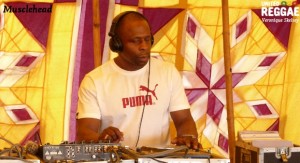 However Saxon never gave up, and this setback only served to double their resolve and prove themselves the undisputed worldwide champion of sound systems. And in April 1994 they had the chance to prove this when they were invited to the Sanctuary in Milton Keynes to battle for the World Sound Cup again.This year, Saxon’s opponents were Kebra Negus, King Addis and the 1993 cup holders Body Guard. After some arduous musical duelling, Saxon emerged unscathed to claim the 1994 World Sound Cup.
Having reached the pinnacle of their trade in the nineties, Saxon are still revered as the Number One sound system in the ears and hearts of revellers today; and still the first choice sound of many performers touring the world.
Saxon continue to play internationally, making a concerted effort to give their hardcore fans some old school live music every year at the Notting Hill Carnival; and their style has influenced modern day musician such as Massive Attack who invited Saxon to play at the 2008 Meltdown festival they curated at the Southbank Centre and yearly residencies at Notting Hill Carnival and one Love Festival.