BEHIND THE combination of superlative equipment, a rare library of music, the creative ability to “present” reggae music and the teamwork which has ensured that Coxsone has for over a decade been the sound against which all others are judged is its founder, Lloyd Coxsone. 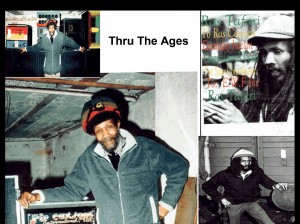 A tall slim man whose angular features are framed by a crown of locks, Coxsone is an articulate and outspoken representative of the sound system fraternity in the U.K. Hailing from Morant Bay, place of the biggest post slavery rebellion led by Paul Bogle, Lloyd arrived in England in 1962. Apart from a six month stretch on British Rail and a couple of short sojourns at Her Majesty’s pleasure, last 18 years have been spent working that subterranean network of blues and sound system dances. Since his arrival Coxsone has been based in South West London; it often comes as a surprise to one and all, especially aspiring sound men, that Lloyd lives in a more than somewhat down market residence, the fourth floor of a red brick council block in Wandsworth. Affluence and sound rarely go together, and though he says “it is a good business” will also concede “it is a hard life, uncertain. . . today up, tomorrow down. We have been up and down many times but we have experience.” 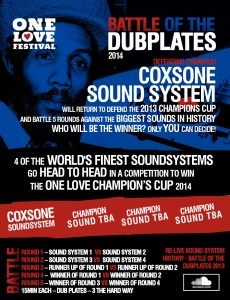 It is an experience that Coxsone readily shares with the youth sounds, like the local up and coming Young Lion, who show up at his door to reason or seek his assistance. The disasters of the past become wisdom of the future and Coxsone shakes his head as he recalls how his first system Lloyd the Matador blew up due to water in the amp. Being young and reckless, living for the moment and not dealing with saving and bank accounts, Coxsone was left no option but to return to deejaying a next man’s sound, as he had done originally with Barry Pierocket, reluctantly accepting an offer from the UK Duke Reid.
With Coxsone at the controls Reid controlled south of the Thames and regularly made forays into territory of other sounds north of the river. Competition was fierce, with a tendency for rivalry to spill over into dance. But it was at Carnaby street’s notorious Roaring Twenties which was the premier venue from late 50s and 60s through to the 70s, and the residency at the Twenties was Coxsone’s ambition.
With the formation of Sir Coxsone sound in 1969, based on a team born out of Duke Reid’s, that ambition was soon fulfilled. It was this team that the man called I Roy was to celebrate in his ‘Coxsone Affair’ and ‘Lloyd Coxsone Time’, and it is teamwork that is the foundation of Coxsone sound now.

“To run a good sound in the UK is teamwork… a young team of men who are ambitious, record crazy and have young ideas, If I get old within my ideas there is many young men who come up with suggestions. By building a team you are building your sound for a long term. In my time in England I have seen a lot of good sound die ‘cause they didn’t build a team to manifest the work of the sound. Teamwork and effort is crucial as you can’t live off your name.”

For his endeavour Lloyd Coxsone can boast an unrivalled selection of music, that his sound was the first UK system to play dub, that they set the pace in equipment and pioneered the use of echo, reverb, equaliser, and also in paving the way for a sound system such as Shaka to take sound to a new dimension, creating atmosphere out of rhythmic weight and effects. Sound system has come a long way since the days of Lloyd the Matador when upon asking an electronics man named Fred to build him a 600 watt amp, Coxsone was greeted with: “You must be fucking crazy. Do you know how much power it takes to drive a cinema? Ten watts!”

The past 15 years has seen a shift from one extreme to another, and the banks of amplifiers in evidence at any sound dance are testimony to the current fixation with wattage rather than, Coxsone feels, an ability to select and present the music.

“People can’t dance to wattage. If a man comes to me and he deals with sound he almost always deals with wattage. Listen, the more you step up weight you lose quality, and a man must be able to hear your vocal playing. Too much sound in this country is running down weight, but I don’t see sound as is rootin’ down like bulldozer as good sound. I am more interested in quality and selection of music.”

Many different horns in treble section and small speakers.

Different philosophical attitudes result in different approaches. Those who have witnessed Shaka and Coxsone in dub conference will know that in following Shaka’s distorted swirling dubonics and sheer physical weight, Coxsone will operate one piece of amp less and maintain a sharpness and a clarity, a kind of “round beat” and initially let the music do the work, before Poppa Festus – the Coxsone Hi-Fl controller– puts on the pressure, injecting tension into the rhythm and building the climax into the dub cuts.

Playing reggae and presenting reggae are two different things, and to Coxsone playing a dance means more than catering for the militant steppers who mainline warrior rhythms.

“We think of our dance public all the time. I am supposed to select music for the people to dance to, that is our job. That’s hat they’re paying us for. If I Lloyd Coxsone am playing as a disc, I like to have the majority of the people dancing. I have no other excuse than to make people enjoy themselves, and I can’t do that if I’m not fit to do my job. 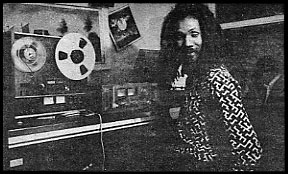